The Eastern Shore of Virginia (ESVA) 9-1-1 Commission, on behalf of the Counties of Accomack and Northampton, is requesting proposals to implement a connectivity network to support the planned 700 MHz P25 Phase 2 public safety radio system. The network will provide connectivity between the planned five (5) RF sites, and four (4) dispatch centers, for a total of nine (9) site locations. Each connectivity link must be a minimum of 100 Mbps and meet all requirements listed in the request for proposals. It is expected that the connectivity network will be designed in a ring topology or monitored hot-standby spurs, providing redundant paths to/from each RF site and dispatch center. Proposals are due February 24, 2023, with mandatory pre-proposal meeting/site visits on January 17 and 18, 2023. The request for proposals can be found on the Commonwealth of Virginia eVA website platform. Questions, any need for additional information, or requests for copies of the request for proposals can be directed to esva@cta-c.com.

The Eastern Shore of Virginia (ESVA) 9-1-1 Commission, on behalf of the Counties of Accomack and Northampton, has awarded a contract for the design, implementation, delivery, and maintenance of 700 MHz P25 Phase 2 public safety radio system to L3Harris Technologies, Inc.  The commission approved the contract award on December 22, 2022, and its Chairman executed the contract documents following the Commission’s special meeting.  The contract sets in place a project to develop a 700 MHz radio system using the latest technology and to deliver new mission critical mobile and portable radios to fire, EMS, and law enforcement agencies for use over a 15-year project period. Implementation is expected to take 24 months.  Public safety personnel will be briefed on the project in early 2023.

Funding for the project will come from an $8.245 million federal Community Project Funding grant administered by the Department of Justice (COPS grant program), other smaller grants, and local funds from Accomack and Northampton Counties.

L3Harris Technologies (L3Harris) is an American technology company, defense contractor, and information technology services provider that produces C6ISR systems and products, wireless equipment, tactical radios, avionics and electronic systems, night vision equipment, and both terrestrial and spaceborne antennas for use in the government, defense, and commercial sectors. They specialize in surveillance solutions, microwave weaponry, and electronic warfare. It was formed from the merger of L3 Technologies (formerly L-3 Communications) and Harris Corporation on June 29, 2019.  L3Harris competed for the project through a Request for Proposals.

Notice of Intent to Award

The ESVA 9-1-1 Commission, upon completion of evaluations of Eastern Shore of Virginia’s RFP #911-21-001 for a 700 MHz radio system project, has issued an Intent to Award letter to L3Harris Technologies, Inc.

In 2020, Eastern Shore of Virginia 9-1-1 began a planning effort to procure a new radio system to serve Accomack and Northampton County fire, EMS, and law enforcement agencies.  The Commission engaged CTA Consultants to study system needs and recommend actions to procure a needed system.  Following acceptance of CTA’s report, the 9-1-1 Commission issued Request for Proposals (RFP) #911-21-001 in October 2021 seeking proposals from qualified vendors.  Proposals from two vendors were received.  The Regional Public Safety Radio System Committee (RPSRSC), in addition to its planning input and direction, was tasked with evaluating the vendor proposals and subsequently making a recommendation to the 9-1-1 Commission regarding contract award.  The RPSRSC will continue to be involved in system design and implementation once a contract is negotiated and awarded.  Contract award is expected in Fall 2022.

In April, Rep. Elaine Luria delivered an $8.2 million CPF award to replace the Accomack and Northampton Counties public safety radio communications system with reliable, integrated, mission-critical voice and data communications for first responders and law enforcement. One of the largest Community Project Funding (CPF) awards in the country, the state-of-the-art radio system will improve communications for emergency responders and make our communities safer.

"Today, Fire, EMS, and Law enforcement personnel in the Eastern Shore of Virginia counties are operating on older public safety radio systems, with coverage issues and an overall lack of interoperability. The funding included in the FY22 federal budget towards the building and implementation of a new state of-the-art regional public safety radio system for our region will provide much improved communications for our emergency responders, ultimately leading to safer communities for those in our region. The efforts by Representative Luria and others, in securing funding for this needed project in our region, are appreciated," said Jeffrey Flournoy, Director of the Eastern Shore 911 Commission.

The Eastern Shore of Virginia 9-1-1 Communications Center, in coordination with the Accomack and Northampton County Sheriff’s Offices, Chincoteague Police Department, and Eastern Shore Community Services Board (CSB), announced on August 6 that the Eastern Shore of Virginia is in compliance with Virginia’s Marcus Alert System, which established statewide mental health awareness response and community understanding services, through its use of Rave Mobile Safety’s Rave 911 Suite and Smart911.

The Marcus Alert System legislation mandates a set of protocols to initiate a behavioral health response to a behavioral health crisis, including for individuals experiencing that crisis secondary to mental illness, substance abuse, developmental disabilities, or any combination thereof. It requires that, by July 1, 2021, every locality in Virginia establishes a voluntary database to be made available to the 9-1-1 alert system and the Marcus Alert System to provide mental health information and emergency contact information for response to an emergency or crisis.

Eastern Shore of Virginia 9-1-1 Communications Center was already in compliance thanks to its ongoing use of Rave 911 Suite and Smart911, a national service that allows individuals to provide 9-1-1 call takers and first responders with critical information through a Safety and Vulnerable Needs Profile. When residents sign up for Smart911, their Safety Profiles display on the 9-1-1 screen and allow 9-1-1 call takers to view key information, like addresses, mental health and medical information, photos, emergency contacts and more. Residents are in complete control of what information is included in their Safety Profile and can choose which information they want shared with 9-1-1.

“Smart911 will be a great resource for First Responders to assist an individual who is experiencing a mental health crisis,” says John Konkel, Emergency Services CIT Coordinator, Eastern Shore of Virginia Community Services Board.

Individuals are encouraged to create their free Safety Profile with Smart911 today to have their information immediately available to 9-1-1 and to receive emergency notifications. Smart911 is private and secure, and information is only made available to the 9-1-1 system in the event of an emergency call. To create a Smart911 profile for yourself and your family, visit www.smart911.com.  You may also download the free mobile app from either Google Play for Android devices or the App Store for Apple devices.  For profile assistance or questions, individuals may contact the Eastern Shore of Virginia 9-1-1 Center’s non-emergency line at (757) 787-0911 or e-mail 911esva@co.northampton.va.us. 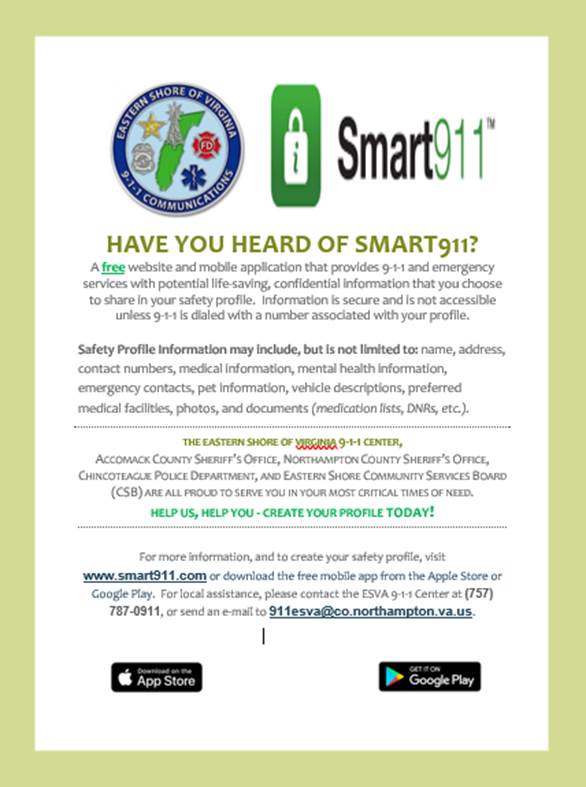 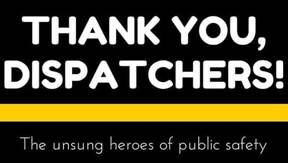 The Eastern Shore of Virginia 9-1-1 Commission placed a simulcast radio system for F1 (Rescue Dispatch) in operation during June 2015.  The system allows transmitters at multiple sites to be keyed simultaneously to deliver dispatch traffic shore-wide.  Previously, three separate transmitters were used based on the geographic location of the call.  When simulcasted, dispatches and radio messages cover all areas; incidents in multiple geographic areas do not have to be replicated.  Additionally, the Commission deployed a simulcast EMS operations channel that moves EMS radio transmissions from the dispatch channel during July 2015.  The EMS Operations channel utilizes multiple repeaters to broadcast 9-1-1 radio traffic and rebroadcast field communications shore-wide.  As the EMS Operations channel was readied for operations, field radios were reprogrammed.

On Monday, November 18, 2013, the Eastern Shore of Virginia 9-1-1 Communications Center transitioned and began receiving 9-1-1 calls that were previously routed to and processed by the Town of Chincoteague.  The Eastern Shore 9-1-1 Center will transfer any police related calls to the Chincoteague Police Department for dispatch, but will directly dispatch fire and EMS calls to the Chincoteague Volunteer Fire Company (Station 3).